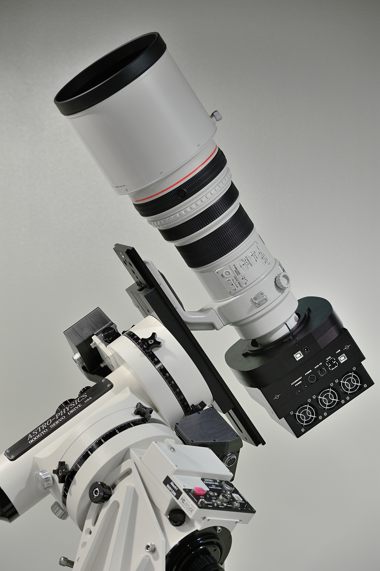 In addition to the optical tube assembly and light collecting camera, a typical astronomical imaging setup includes automated components, such as filter wheels, focusers, field rotators, and off-axis guiders. Besides useful functionality and convenience, each of these devices introduces additional weight, typically offsetting the center of mass further away from the optical tube assembly. This presents a formidable challenge for focusing devices that in addition to carrying the weight of the image train and accurately placing the imaging detector in the focal plane must maintain perpendicularity of the image sensor to the optical axis. These objectives need to be met while taking up minimum amount of space along the optical path. Modern fast optics and small-pixel sensors require fine resolution of focus adjustments in order to maintain the imaging sensor in the very narrow optimum focus range.

State of the art

Commercially available solutions perform inadequately in one or more of these requirements. Common rack-and-pinion focuser designs take up large amount of space along the optical axis, thus limiting the number of additional instruments that could otherwise be placed in the imaging train in front of the detector. Lack of structural rigidity of a sliding tube design results in uneven focus throughout the image, and the back-driving nature of the rack-and-pinion arrangement makes these devices prone to sliding out of position under heavy payloads.

Structural rigidity of the load carrying components was optimized under the given geometric constraints through Finite Element Analysis.

A notable challenge of this project was in fitting all of the mechanical moving and structural components into a 32mm thick housing that in additional to providing mechanical support shields the internal parts from contamination from the environment. A special assembly procedure was developed that guarantees precise operation under demanding operating conditions.

A novel adapter concept, developed specifically for this project, maintains perpendicularity and a rigid connection to external devices. The concept was later adapted in other project.